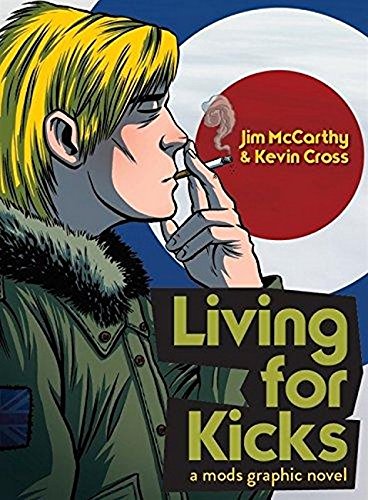 Written by Jim McCarthy and Kevin Cross, Living For Kicks is an electrifying Mods Graphic Novel that brings the British pop culture of the 1960s to vivid life. The main character is Spike Spellane, a young Mod trying to hustle enough money to start a record label in London's Soho. His fictional adventures are interwoven with their real-life contexts and counterparts, revealing in vibrant detail the story of a subculture.

Spellane's story embraces legendary locations, famous gangsters and real music stars. Taking place against the background of the notorious Christine Keeler scandal that rocked the country and almost brought down a government. Real life also provided the setting for the novel's spectacular climax - the infamous battles between Mods and Rockers staged on the beaches of southern England.

Living For Kicks shows and tells exactly what it was like to be a mover and shaker during a unique era of British pop creativity and social upheaval.