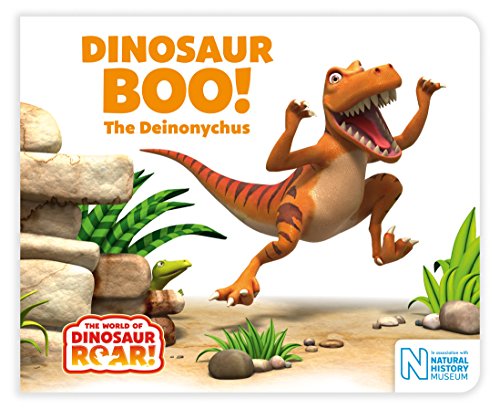 The naughtiest dinosaur anyone knew, was the sneaky Deinonychus, Dinosaur Boo!

Dinosaur Boo loves nothing more than playing tricks on the other dinosaurs, but he had better look out as he might just be in for a surprise of his own . . .

The wonderful rhyming text written by award-winning author Jeanne Willis, introduces Dinosaur Boo and various other dinosaur characters in a story suitable for the very youngest children. Very funny, and great to read aloud, Dinosaur Boo! The Deinonychus has been approved by Dr Paul Barrett of the Department of Earth Sciences at the Natural History Museum in London, and the book contains a spread of simple dinosaur facts and a pronunciation guide.

This is the second book in The World of Dinosaur Roar! series, a collectable series of preschool books created by Peter Curtis and produced in association with the Natural History Museum in London. Inspired by the classic picture book, Dinosaur Roar! by Paul Stickland and Henrietta Stickland, this colourful series introduces a range of authentic dinosaur characters to very young children.


Jeanne Willis was born in St Albans, Herts, in 1959. As a young girl she sought adventures though writing comic strips and books. After completing a copywriting course at Watford Art College she went on to work in advertising. Today, Jeanne is an internationally renowned, full-time writer and has published over a hundred books - ranging from picture books including The Bog Baby and Who's in the Loo?, to YA, poetry and fiction. She has won several awards, including the Children's Book Award, the Silver Smarties Prize and has also been shortlisted for the Whitbread Award.